The vision for Lifetime Orthodontics has always reached much further than just straight teeth. There are many ways to work in the field of orthodontics straightening teeth without taking on the hardships of running a business. Without these hardships, however, I would not be able to fulfill my higher missions. The mission to inspire and be inspired every single day. The mission to be a part of a community and be a platform in which we all can come together to reach higher. The mission to do as much possible good in the short amount of time that we all have. This ‘Going Beyond the Smile’ is what Lifetime Orthodontics is all about. So, what is the Pink+ Project? Pink has become synonymous with breast cancer. We chose to use this as the primary color in our project but the ‘+’ is to really signify all the other classifications of cancer that we are representing. It is a project that aligned with our mission. There are many projects that we do and could have done but this one resonated with us for two reasons. The first was a scare that one of our team members had when they fought a short and victorious battle with cancer. The second was from the high prevalence that I, Dr Wesley, have in my own family. Cancer has touched us all through either ourselves or our loved ones. We did not work on the Pink+ Project to raise awareness necessarily. There is not a soul out there that is not already aware of how awful cancer is. The Pink+ project was to honor those that are fighting or have fought the battle, yes. To cherish all of those that have transitioned and always live on for through us. It is however, a reminder to celebrate life every single day. To wake up to be inspired and inspire others. To love unconditionally. This is the message that I shared with the audience as we gathered for a toast at our ‘Reveal Party’ on August 15, 2019. I share that and this final message with you readers as well….. “Do these things, and you too will never perish.”

The Pink+ Photoshoot was held on July 27, 2019. You would not have recognized the office as an orthodontic office! The team did an outstanding job of transforming it into a professional and artistic photography studio. The entire office was lined in pink streamers and balloons. The reception had an incredible spread of food and drinks that all had a pink theme to them. We had invited neighboring dental offices, our patients and their families, as well as our entire community. Some were cancer survivors, and some were fighting the battle. Some just wanted to show support or honor for those that were lost to cancer or currently fighting. There were 68 guest that showed up that day! We had photographer and project originator, Tony Demetri Peniche, fly in from Portland to unleash his creative magic on our guest. Laughter, creativity, and inspiration flooded the office for 8 hours straight. We had an absolute blast! 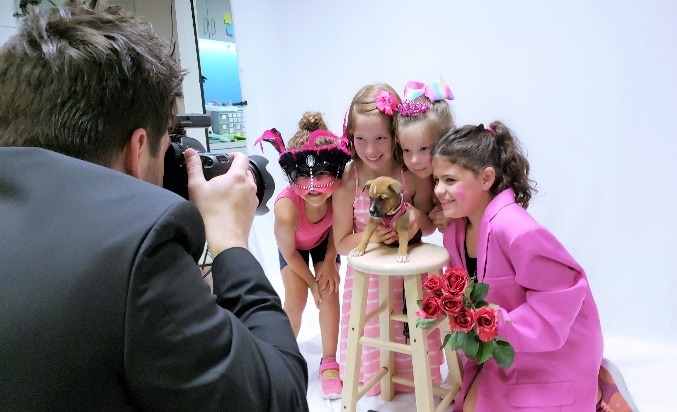 Three weeks after the photoshoot we had planned an open house event called the Pink+ Reveal Party. This was an art gala style event where we had printed off all the photos and showcased them around the office for our guest to enjoy. It nearly brought me to tears at moments when I saw how much hard work and heart that my team put into this. They truly are the best! We wanted to go beyond the art and make some interactive and engaging art projects as well. Here are the highlights from the Reveal Party. This was the center piece of the party. We had 68 guests attend the photoshoot. Some had brought a large group of friends or their family. Some were small groups of two or three. Some were solo and some were even dogs! We ended up with hundreds and hundreds of photos taken. Of those hundreds of photos, 81 were selected and edited. We had printed these out in high resolution and spread them throughout the office for our guest to peruse through. They were very creative. Some very the cutest dang thing you had ever seen, and some made you laugh hysterically. As a gift, we asked all the attendees from the photoshoot to take their photos from the walls. In October, we plan to release several more of the digital copies to be shared. We will also include many of the photos that were not printed as well. 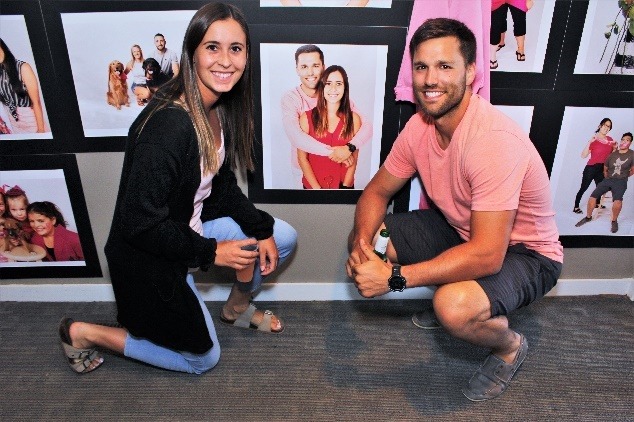 The Food and Beverage

This food was incredible! We had chosen Holiday Market of Royal Oak to cater our event. Although I did not eat until the very end, they could not keep my hands off the salmon and beef skewers! There was much more than this that we could hardly keep replenished. We also had two bars that served beverages for all ages. The gentleman that came to bartend and serve the event were a pleasure to have and did a fantastic job. I could not say enough about the outstanding job that Holiday market did! holiday-market.com At the photoshoot we had the pleasure of meeting some amazing people! Amongst those was Becky Jones. Becky shared her story about her son, Sam. Same was just shy of 6 years of age when he lost his battle to cancer. While his story had a very sad ending, the things that Becky is doing now had been incredibly inspiring to me and my team. She shared how the people at St Jude had made the tough times for Sam and his family the best it possibly could be. She also helps to spread awareness and in doing so has helped many pediatric cancer survivors live on. “Over 50 years ago the survival rate for children with cancer was 20%. Today the survival rate is over 80%.” This is all in thanks to people like Becky, St Judes, and everyone else that has helped raised awareness/funding for cancer research. To honor Sam, we surprised TeamSuperSam with our super hero selfie station that included a guest appearance from Batman himself! The station had superhero masks, a donation box, and Lifetime Orthodontics donated $10 for every photo that was taken with Batman. We raised $200 and hope to contribute more to this great cause as we continue to partner with TeamSuperSam at our office. Hear more about their story by visiting them at Team-Supersam The Tree of Honor was a tree were the guest could write the name of someone that they wish to honor on a tree leaf. From the leaves, we added them to a tree branch and created a tree of this. The idea originated from a wall of honor idea that we had. When the team went to Hobby Lobby, they returned with this tree branch and leaves. It was an outstanding idea. The tree will continue to be showcased in our office. When you visit, please check it out and feel free to add a leaf of your own.

This project absolutely blew me away and was the creative genius of our clinical manager, Kat. We played around with the idea of a selfie station, but I had no idea that she had this planned and my jaw just dropped when I returned to the office before the party. On the windows outside our office she created wings made of not only the pink cancer support ribbons, but she colored the rest of the feathers with colors that represent the other classifications of cancer that are out there. This livened up the exterior of our sometimes vanilla medical/dental complex. Guest stood in line throughout the night to have their pictures taken in front of this masterpiece. I imagine that this is very much against our condo by-laws, but we plan to keep it up as long as they will allow us to. Please come by and capture your own photo before it is gone! The Donations and Entertainment

We wanted to make sure there was enough for all ages, so we asked local businesses to join us in our cause. They delivered!

Fairytale Entertainment generously provided face painting for the entire party. Kids and adults alike stood in line to get their faces painted. It was amazing! They also donated Batman’s time for our party and for our TeamSuperSam installation. This was the best Batman I had ever seen. From the way he spoke, to his grand entrance, to his gestures. As far as I am concerned that was Bruce Wayne under that mask the entire evening! Please visit https://www.fairytaleyourparty.com/ to see all the incredible things that they can do for your next party.

We want to thank ‘Nothing Bundt Cake’ for donating a delicious cake to our party. We raffled off two other prizes that were donated. One was a $50 Fun Card from C.J. Barrymores and the other was a ‘Lux Wine Tasting’ from Cooper’s Hawk. 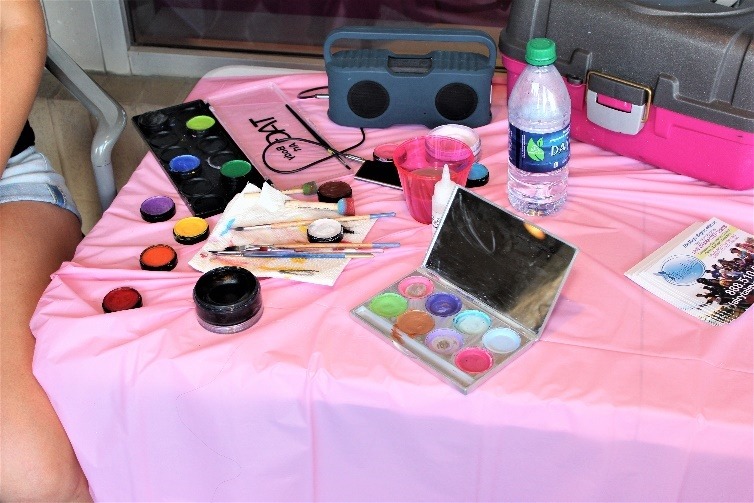 At the end of the night, we gathered everyone for a toast. With my MTV microphone in hand, I lead the group in a toast to life. It was beautiful standing amongst everyone who joined us that night. After my toast, I asked if anyone else would like to come up and share their stories. I cannot thank enough, everyone who joined in that moment. There were tears and laughter alike. It was the perfect way to end a truly magical evening. 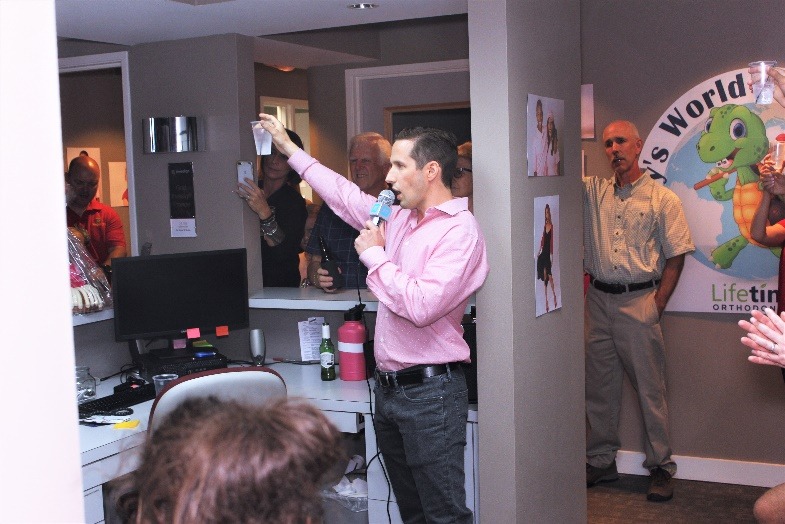